Not any thalamus in the allen data

I cant find any mediodorsal or centromedian thalamus in the allen data???

Which data do you mean? It’s a structure in the CCF, and has gene expression and connectivity information. See for example this link from the connectivity atlas. 3d Viewer :: Allen Brain Atlas: Mouse Connectivity

Mediodorsal has abbreviation MD, and sits under the thalamus and medial thalamus in the hierachy (TH>MED>MD). 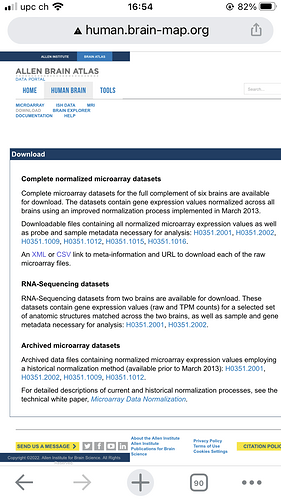 Can find any mediodorsal thalamus.

If you look for structure IDs 4401 or 4456 in the SampleAnnot.csv file, you will see that they aren’t there. But if you look at their parent structures (seen in the parent_structure_id column in Ontology.csv), which have the IDs 4400 and 4455 (and are named “medial group of nuclei”), you can see several rows in SampleAnnot.csv that have that structure ID. So those would be the entries that contain data from mediodorsal thalamus.

The grouping of thalamus nuclei is described in the ontology documentation - quoting from that:

Thalamus
The ontology and nomenclature of the thalamus is based on The Thalamus (Jones, 2007), the premier work on the thalamus, as well as on personal communication with Edward G. Jones, who kindly supplied his ontology and nomenclature. This ontology and nomenclature extends to the epithalamus, as well as to those structures included in the ventral thalamus division, such as the zona incerta and the reticular nucleus of the thalamus. For tissue sampling purposes, the thalamus is sampled at a gross level, combining nuclei in a manner consistent with Jones’ subdivisions. Groupings for sampling from the dorsal thalamus, therefore, include anterior nuclei, medial nuclei, lateral nuclei (ventral and dorsal portions), posterior nuclei, caudal intralaminar nuclei, rostral intralaminar nuclei, the lateral geniculate nucleus, and the medial geniculate complex. From the ventral thalamus, the reticular nucleus and the zona incerta are sampled, the latter containing the Fields of Forel when present.

Wait I will look.

This is from the Ontology.csv file from the ZIP file associated with donor H0351.2001: 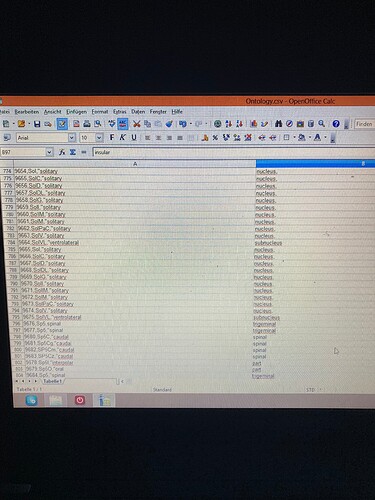 It looks like you’re having more issues with importing CSV files here. It’s splitting on spaces instead of on commas. I don’t know if that’s related to why you’re seeing different entries on different rows (for example, the solitary nucleus shows up starting around lines 1372 in my files), though.

You could try a few things:

The ontology file should have 1840 lines in it.

Great - glad to hear it!

This work cant be done on a laptop correct?

I’m not sure exactly which parts of the analysis you’re referring to, but I would think most modern laptops would be able to handle most things you could do with these microarray data.