The Common Coordinate Framework (CCF) is defined in a basic image coordinate system, using the top-left-rear pixel as its origin, and incrementing in the X, Y and Z axes up to the number of pixels in each dimension (ML, DV, AP respectively). It was not designed as a targeting coordinate system. Using some transformations the CCF can be roughly aligned to the stereotactic atlas, however, since it was not it’s intended purpose one should take caution when using the CCF for targeting, even after applying these transformations. In the image below the CCF space in 25 μm voxels is depicted. 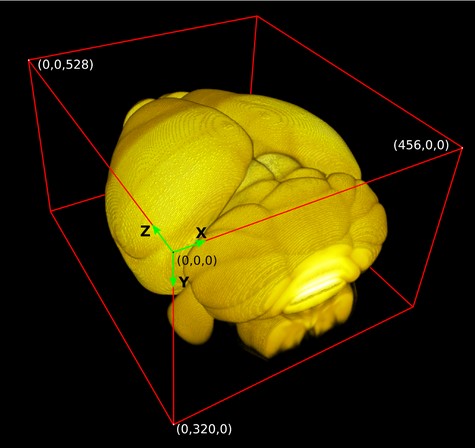 There are several transformations necessary to align the Allen brain atlas to the stereotactic framework: (1) there is an estimated 5 degree tilt in the sagittal plane and (2) the CCF is stretched in the DV direction, estimated at 94.3%. Note that the position of Bregma and the above mentioned transformation values are estimations.